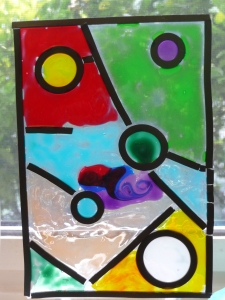 Tomorrow our community of over 100 interfaith families will picnic together for the kickoff of the school year. In our Sunday School, children learn about both Judaism and Christianity. It is a radical concept, but one that is spreading to new cities each year as more and more interfaith families choose to educate their children about both religions.

My children have attended this program since kindergarten, and they are now 15 and 12. When my daughter graduated from Sunday School at the end of 8th grade, she chose to keep coming with us on Sundays and became a teacher’s helper in the kindergarten class.

Many adults grew up hating Sunday School. Our community strives to make the experience as interactive and multi-sensory as possible, using storytelling, music, art and field trips. My daughter helps the kindergartners learn songs they will encounter in synagogues and churches—the roving music teacher comes into the class with a guitar to sing “It’s a Tree of Life” as well as “This Little Light of Mine.”

My daughter helps the children with craft projects: maybe constructing a tzedakah (charity) box to put coins in. Or decorating a cloth matzoh or challah cover with fabric markers. Or making “stained glass” with translucent gels on plexiglass. In fourth grade, after learning about the Christian story of the loaves and the fishes, her class used real fish to make Japanese fishprints on T-shirts.

My son, at 12, is just entering the two-year Coming of Age program. Last year, his classes included Hebrew literacy as well as a historical and theological survey of the Jewish and Christian denominations. They went on field trips to a local Reform Shabbat service, a Jewish museum, a Quaker meeting, and a Catholic mass. Each student presented reports on different denominations. My son chose to study the Mennonites, one of the religions in his complex personal ancestry. He also thrilled his classmates in his presentation on Chasidic Judaism by showing a youtube video of rapper Matisyahu and analyzing some of his lyrics.

4 Replies to “Back to School: Dual-Faith Religious Education”