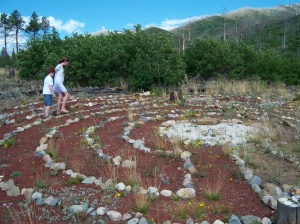 I subscribe to the theory that spirituality is primarily a neurochemical response to music, dance, beauty, and sense of community. Not that there’s anything wrong with that. I seek out the rush of spirituality, and have found it in synagogues, churches, nature, and concert halls. I have felt that rush in a crowd of people transported by the live music of Bob Marley, the Grateful Dead, Regina Spektor.

Clearly, I’m not alone. All mystic traditions make use of these same elements to inspire spirituality, and the fact that these elements are common across the lines of dogma and theology, across even the boundaries of monotheism, polytheism and atheism, confirms my interfaith perspective. The Chasids, the mystics of Judaism, know the power of dancing and chanting, as do the Sufis, the mystics of Islam. The Jewish Renewal movement is reclaiming this power, uncoupling it from the orthodoxy of Chasidism and merging it with a more progressive framework.

As an interfaith child, I have had profound spiritual moments in the dim stained-glass light of Chartres Cathedral, while listening to Bach’s Easter Oratorio at the Peabody Conservatory, while dancing and chanting a Shlomo Carlebach song with Rabbi Tirzah Firestone, and while dancing and chanting a Sufi zikr in the thin air of New Mexico’s Sangre de Cristo mountains in a sacred grove at the Lama Foundation.

My interfaith children have deep grounding in the specific traditions of Judaism and Christianity bequeathed to them by ancestors. So you could say that they have “permission” to access the swell of emotion invoked by singing Handel’s Messiah in Saint Stephen’s Episcopal Church at Christmas. And they have “permission” to feel the primal call of the shofar penetrate their souls. But as interfaith children primed to seek out the spiritual, their comfort zone expands far beyond these two inherited traditions. My 12-year-old son has gone on more than one Buddhist retreat. My artist daughter feeds her soul on the ephemeral outdoor sculptures of Andy Goldsworthy. Deep is good. Tradition is good. But for our family, more is also better. We want as much singing, dancing, beauty and community as we can fit into our lives. We seek out these experiences wherever and whenever we can find them.

One Reply to “Finding Interfaith Spirituality”