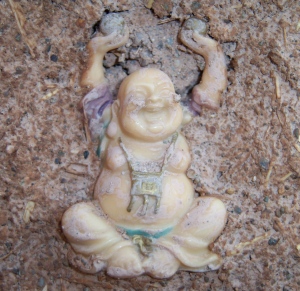 Well, that’s not exactly true. I’m riffing on the title of a new book by theology professor and former Catholic priest Paul Knitter: Without Buddha I Could Not Be a Christian. Peter Steinfels reviewed it yesterday in The New York Times in his “Beliefs” column, calling it a “compelling example of religious inquiry.” I have asked this before and I must ask it again: why is it considered groovy and intellectual to claim Buddhism and Christianity, or Buddhism and Judaism? And why is it, at the same time, considered deeply transgressive and troubling to claim Christianity and Judaism? Sigh. The primary reason seems to be that extreme Freudian tension in the Judeo-Christian family tree leads to discord and dissonance. In contrast, Buddhism is an alluring, exotic distant cousin: we are all on our best behavior when visiting Buddhism.

I have not read Knitter’s book yet–I really do look forward to reading it. According to the column, Knitter argues for religious “double-belonging.” I am very pleased to welcome a thoughtful and daring academic as he  throws in his lot with all of us who have been in the interfaith families movement for decades, “double-belonging” without the approval of religious institutions.

Columnist Steinfels remains skeptical. He asks whether Knitter can continue to call himself a Buddhist Christian, or whether he will have to become a Christian Buddhist. No. No. No. Do not take our “both/and” state and try to force us back into “either/or” boxes. That’s the whole point. We are both, or as Knitter says, we double-belong.

Steinfels’ binary question reminded me of a seminal episode in my education at Reform Jewish Sunday School. The teacher drew a line down the center of the room and asked us to stand on one side of the line or the other, based on whether we considered ourselves Jewish Americans, or American Jews. Stringing together identities like that, listing one as a modifier of the other, requires prioritizing. Even as a child, I understood that the terms were loaded. I understood that the teacher wanted us to choose “American Jews” because Judaism was more important to her than being American. I knew the truth was that I had two religious heritages, Judaism and Christianity. And the truth was that being in America was more important to me than either of my religious identities. I was utterly paralyzed. I wanted to straddle the line. As an interfaith child, I am allergic to choosing, and I defend my right to resist categorization.

I am not a Jewish Christian. I am not a Christian Jew. I am both. I am neither. I am an interfaith American. I am springing out of those boxes, along with an entire generation of interfaith children. We are waiting for academics, and religious institutions, and journalists, to catch up with us.

12 Replies to “Without Jesus I Could Not be a Jew”