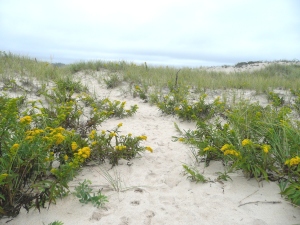 Today’s profoundly disturbing NPR story titled “Vigilantes Patrol for Jewish Women Dating Arab Men” is causing a stir in the blogosphere. First of all, once again, thank God I live in the United States where it would not be legal for a municipality to support a group of religious zealots to accost teenage couples parked in a lover’s lane.

The NPR story brought on a storm of protest and questions from listeners. Immediately, we’re plunged into the eternally circular argument over whether Judaism is primarily a religion or a tribe. Is the  “mixed dating” problematic to these vigilantes because it is mixed by religion or ethnicity?  It’s convenient to forget that Jewish girls may actually be Arab  (or Ethiopian, or Russian). Arab boys may be Muslim, or Christian, or Jewish for that matter. So the whole concept of Jewish/Arab mixed dating conflates and confounds.

Why did the NPR reporter interview the Jewish girls and vigilantes , but not the Arab boys? The tone was snarky, and appeared to discount the possibility that there was any possible value to the romantic relationships between young Jews and Arabs. What about Jewish boys dating Arab girls? How does Jewish matrilineality versus Muslim patrilineality play into this? All the vigilantes are men. How do Jewish mothers feel about their daughters dating Muslims/Christians/Arabs? How do Arab mothers feel?

More questions than answers here, and a rather thin story. But the idea of the vigilantes, the threat of violence in an attempt to keep lovers apart, brings to mind Romeo and Juliet. The vigilantes appear to be thrashing around in a desperate last-ditch attempt to forestall the inevitable. It’s ironic that these couples are a byproduct of Jewish settlements built in Arab neighborhoods. A battle against the power of hormones seems doomed.  If we live together, there will be stolen kisses, there will be real love in some cases, and there will be interfaith children.