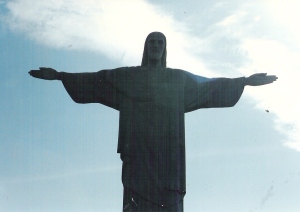 Recently, someone asked me what I get out of Christianity: why not stick to calling myself Jewish? It is sometimes hard for Jews to understand, after a long history of oppression and conflict, why Christianity holds any appeal for interfaith children. Above and beyond our own Christian parents (Mom, you are of course the number one thing I love about Christianity!), here are ten random Christian things I appreciate:

Soup Kitchens. The life of Jesus, the way he tended to the poor and the sick, inspires hands-on grappling with poverty. From the international aid agencies run by Christians, to the urban clinics and shelters, these “ministries” may have begun as missionary work, but most aid workers have no such ulterior motives. For me, cooking a meal and serving it to the women at Luther Place involves a kind of border-crossing that does not occur when I simply send off a check.

The Gospels. My rabbi tells me that Jews believed in physical resurrection, even before the time of Jesus. But this story—complete with politics, betrayal, murder—was perfected by the Gospel writers. Whether it’s refracted through the Wizard of Oz, the tales of Narnia, ET, Godspell  or Kazantzakis, the story of Jesus moves me. And it’s not important to me whether it “really happened” or not.

Bishop John Shelby Spong. The former Episcopal Bishop of Newark, Jack Spong, came to speak to our interfaith families group—he’s probably the most senior Protestant theologian willing to be seen with us. He rejects the literal interpretation of Virgin birth and physical resurrection, he ordained openly gay priests. Spong is radically amazing.

The Music. Imagine a world without Gregorian chants, the liturgical music of Bach and Handel, Gospel, bluegrass and Johnny Cash. My Jewish dad and I both love to sit down and pound out Protestant hymns on the piano.

The Renaissance. I love  Cathedrals, embroidered vestments, illuminated manuscripts, religious paintings, oh, just about everything in Italy I guess…

Nuns and Priests. Many of the nuns and priests I have known working in the developing world (some of them giving out condoms on the frontlines of the AIDS epidemic) have been champions of local languages and culture, lovely souls, peace-builders. I also have a thing for Jesuit intellectuals who question in a way I recognize as “Jewish.”

Liberation Theology. In Latin America, the Catholic church often provided the only counterweight to oppressive military regimes. The current Pope continues to try to dismantle the remnants of liberation theology. But many who fought for justice drew on Catholic social teaching: among them Dorothy Day, Paolo Freire, Desmond Tutu, Martin Luther King and Oscar Romero.

Simplicity. The Quakers were instrumental in the anti-slavery movement. And while I love the ornate ritual of a Cathedral mass, as a New Englander I also love the simplicity of the Puritan, Shaker and Quaker esthetic: the white steeples, the wood furniture, the closeness to the land and farm, the quiet, the simplicity.

Christmas in New England. Singing carols on the town green, the snow piling deep and soft, a brass quintet, and yes, yes, the tree. My parents, the only interfaith couple on the street, hosted a Christmas party for the neighborhood every year of my childhood, with my Jewish dad at the piano leading carols fueled by a killer punch made of sauterne and champagne. My friend Ian Spatz, father of interfaith children, has a tongue-in-cheek theory that Jews actually intermarry because of Christmas envy. There may be something to it.

11 Replies to “Ten Things I Love About Christianity”