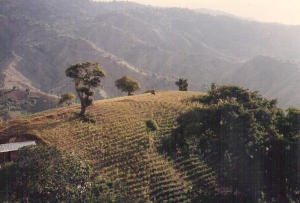 My mother-in-law has a sequined Vodou flag hanging above her fireplace in Connecticut. When people inquire, she explains that it depicts the ship Imamou transporting the Haitian dead to the land of the spirits. Visitors tend to go quiet as she delves into the belief system of Vodou, the national religion of Haiti.

This week, Imamou groans through the waves, tragically overloaded with tens of thousands, perhaps hundreds of thousands, of passengers–Haitian earthquake victims. As the horrific news and images swirl around us, I wait to hear whether my husband’s skills as a Creole-speaker and relief worker will mean he gets on a plane. I know he wants to go: of all the countries he has worked in around the world, Haiti is his first love, never forgotten.

In 1983, I went to visit him while he was working in a home for street boys in Petionville. In preparation, I read Maya Deren’s Divine Horsemen: The Living Gods of Haiti, a seminal work on Vodou written by a filmmaker in the 1950s. Then I read Robert Farris Thompson’s influential Flash of the Spirit: African & Afro-American Art & Philosophy, a book describing how West and Central Africans brought their religions to the New World and preserved them by interweaving them with Catholicism in places including Haiti, New Orleans, and Brazil.
I arrived in Haiti during the week when the Christian holidays of All Souls, All Saints and the Day of the Dead converge with the most important Vodou celebrations. In the night, we heard drumming, and got out of bed to walk until we saw a circle of dancing Haitians dressed in white. An eager journalist, I wanted to approach the circle. My husband, with healthy respect for the culture in which he was living, convinced me that we should return to bed, and not intrude.

Somehow, our lives have continued to circle the Atlantic in a mysterious pattern echoing the slave trade. We lived for three years in West Africa, including trips to Benin, Togo and the Yoruba centers that so informed the religion of Africans in the Americas. Later, we found ourselves living in northeastern Brazil, where African religions absorbed Catholic saints and symbols to become Candomble.

So why write about all this on my interfaith blog? A lot of folks (Pat Robertson, David Brooks) are making ignorant comments this week about “voodoo” (a Hollywood construct) and Haiti. For those who want a deeper understanding, I recommend the two books above–both are authoritative, deep yet lively. Joseph Campbell wrote the introduction to Deren’s book.

In my own interfaith journey, Haiti provided the first thrilling encounter with complex, compelling and obviously syncretic religious practice. Later, I came to see all religions as syncretic: evolving together, influencing each other, intertwining and swapping information like strands of DNA. In Haiti and Brazil and Africa, adhering to more than one religious worldview simultaneously is often central, not marginal. In my quest for interfaith acceptance, I take inspiration from my time in these rich and deeply spiritual cultures.

Sorting through our photos from Haiti, trying to choose one for this post, I found many images of the street boys who taught my husband Creole. They should be men now in their prime, and it is very hard to think about their fates this week. As others have pointed out, death is always close in Haiti, and the dead remain an intimate part of the family. After the spirit Agwe ferries Imamou through the waters, their souls are home again in Ginen (Guinea), the land of the ancestors. The idea provides comfort, much like the consoling Judeo-Christian idea of heaven as green pasture. So I chose a photo of a bit of green in Haiti’s mountains, remnants of farmland and trees, in an attempt to envision a peaceful place for all of these souls, and a remnant of hope for a future of ecological and agricultural renewal in Haiti.

Being Both: Embracing Two Religions in One Interfaith Family is available now in hardcover, paperback and eBook from Beacon Press.