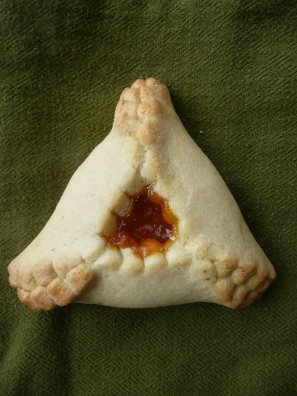 Yesterday, I donned some festive garb, and headed to our interfaith community‘s Purim celebration. It has been said that most Jewish holidays fit one recurring theme: “They tried to wipe us out, we survived, let’s eat.” Purim fits that model (along with Passover and Hanukkah). Growing up in a Reform temple, the notion that Purim also celebrates an interfaith marriage somehow never came up. Now, celebrating the holiday with my interfaith community seems particularly appropriate.

In the Purim story, Persian King Ahasuerus (apparently a Zoroastrian) chooses Esther in a beauty contest, not realizing that she is Jewish. When the Jews of the land are threatened with genocide, Esther outs herself to the King as Jewish, and convinces him to save her people.

The Purim story intrigues for many reasons. The Book of Esther, while part of the Jewish Bible, is not in the Torah, (the most holy Jewish text comprising the first five books of the Bible), but is thought to date from a much later period, with the story taking place somewhere between 600 and 400 BCE. In fact, oddly enough, the Book of Esther does not mention God. Esther, the heroine, with the help of her Uncle Mordecai, uses politics, diplomacy and feminine wiles to save her people. God gets no credit whatsoever. This, along with the fact that the celebration includes drinking, dressing in costumes, loud noise, and games, makes it a popular holiday with the large secular, atheist and agnostic Jewish contingents, as well as with children. Purim shares a sense of rowdy release from social norms with Christian pre-Lenten Carnival festivities, and both holidays seem to trace their origins to “pagan”  spring fertility rites.

But peering through an interfaith lens, the most radical and transgressive aspect of Purim is the fact that the Jewish community in Persia would have been doomed if Esther had not intermarried. It was only because of her marriage to the Persian king that she was in a place to step up and save her people. What would have happened if she had refused to marry him because he wasn’t Jewish?

Many have tried to explain away the fact of Esther’s intermarriage. Some speculate that she intermarried only because it enabled her to save her people:  exceptional circumstances. Others argue that her intermarriage was acceptable because she was a woman, and Jewish law respects matrilinial descent. More recently, the Purim story has been used as a cautionary tale–the problem is not the intermarriage, per se, but the secular lifestyle and “disengagement” that led to the intermarriage. One group of academics acknowledged that Esther’s marriage saved her people but was somehow able to conclude:  “But the lesson is not that intermarriage is good.”

Intermarriage occurs throughout the Bible: it drives the plot line in many a Biblical story, and not all those who intermarry are women. As a “patrilinial Jew” and an interfaith person, I take issue with the idea that Esther’s intermarriage was acceptable only because she was a woman, or because of extenuating political circumstances. Or that she is somehow a heroine in spite of, and not because of, her immersion in Persian culture. It was, precisely, Esther’s cultural fluidity and willingness to intermarry that saved the Jews.