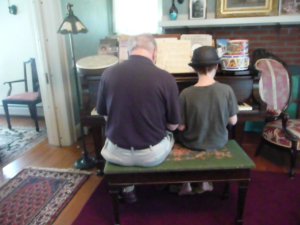 I have a mystical, spiritual connection to New Orleans, even though, somehow, I’ve never been there. I imagine New Orleans as a city where “being both” comes naturally: being both French and English-speaking, being both American Indian and African-American, being both Catholic and an adherent of the great West African religious traditions.

But also, readers of this blog know the story of my great-grandparents, a Rabbi and a Jewish orphan who met and married in New Orleans. Their grandson, my father, still plays jazz piano at the age of 86, and the haunting melody to “Do You Know What it Means to Miss New Orleans?” was part of the soundtrack of my childhood.

So somehow, it seemed like fate when a poignant and beautifully-written blog by an intermarried woman in New Orleans began sending new readers to “On Being Both,” last week. To understand why I write this blog, read her post on discovering “On Being Both.”

My goal in writing here has always been to support the members of interfaith families in feeling whole, proud, balanced:  to encourage them to fully explore their religious and cultural ancestries. Those of us in Washington, Philadelphia, New York, Chicago, Boston, Denver and a handful of other cities are lucky to have thriving interfaith family communities to support us. Elsewhere, people who want to raise children with access to both religions still need to struggle to find religious institutions to accommodate this radical notion, or at least to look the other way. I admit that I hope to inspire isolated families to build new interfaith communities, so that more children grow up internalizing a positive attitude about their dual birthrights.

I will turn fifty this year, and I am already planning a trip to New Orleans  to celebrate, and to research the story of my great-grandparents. While I am there, I plan to do whatever I can to support the interfaith families of New Orleans in their “bothness.”

3 Replies to “Interfaith in New Orleans”