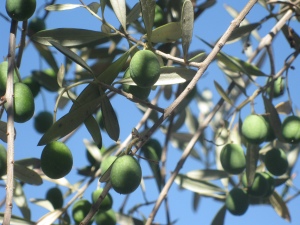 Many of us in interfaith families are squeamish, ambivalent, conflicted about Israel. Usually, I try to stay clear of the topic altogether. But I was scanning the program for the J Street Conference, and saw that there was going to be a sneak preview of a film, “Between Two Worlds,” touching on interfaith families. The title caught my eye, because, strangely, it is also the title of the first book written by and for adult interfaith children. And then I noticed that there was also going to be a breakout session on how to engage young Jews on the subject of Israel. Surely, the question of intermarriage would arise in that discussion as well. So I found myself with some 2000 other people this week, at the Washington Convention Center.

It was hard to resist the progressive spirit, the ebullient mix of older hippie activist rabbis and energetic millenial students, the embrace of the Palestinian “other,” the ardent longing for peace. I got to chat with Medea Benjamin, founder of the brilliant and rambunctious anti-war Code Pink movement. I was moved by Alan Stopper, a sort of Johnny Appleseed figure, personally handing out cards for his start-up “Fruit of Peace” project to plant olive tree saplings in Palestine. I ran into a friend who works for the New Israel Fund, a major sponsor of the conference, which advocates for religious pluralism and civil rights in Israel. And I ran into the rabbi who is tutoring my son for his Bar Mitzvah. Despite my ambivalence about Israel, about so many things, despite my own “way out of the box” journey, I felt like there was room for me in this huge and colorful tent.

“Between Two Worlds” addressed the very relevant question, “Who is entitled to speak for the tribe?” Filmmakers Alan Snitow and Deborah Kaufman point out that there is “no Jewish pope,” no official Jewish opinion on anything. While the film centered on how the Jewish community has been divided over Israel, the tale of Kaufman’s interfaith family (her sister converted to Islam) is woven through the story. The intent of the film is to “provoke a new kind of conversation” because “we all face censorship and exclusion.” Interfaith families will certainly find resonance in that statement.

So how do the themes of Israel and intermarriage interplay? At a conference session entitled “Can Young Jews Reclaim (or Redefine) a Robust Connection to Israel?” the presenters set forth at least two theories for why so many young Jews are alienated from Israel. One theory, highlighted by Peter Beinart in a controversial piece in the New York Review of Books, posits that “leading institutions of American Jewry have refused to foster—indeed, have actively opposed—a Zionism that challenges Israel’s behavior in the West Bank and Gaza Strip and toward its own Arab citizens,” thus alienating young progressive Jews. Intermarriage was not even mentioned in Beinart’s piece.

In contrast, at the conference this week, researcher Steven M. Cohen repeated his assertion that “all of the decline” in attachment to Israel is caused by intermarriage. A lot of debate ensued, but no actual interfaith children spoke out. So I found myself at the microphone, making a statement along these lines…

As an interfaith child and parent, I am averse to strict dichotomies, to the “either/or.” It is not either intermarriage, or distress over civil rights issues in Israel, causing our alienation. The two causes are inextricably linked: a classic “both/and.” As interfaith families, we are more affected by dissonance in Israel. As people with Christian and Muslim family members, we cannot help empathizing with more than one side. And if we are “patrilineal Jews,” we live with the irony that the Jewish state does not allow us religious marriages or burials.

Nonetheless, I left the conference with a sense of hope. Hope, that the new Jewish communities and organizations being created by a millenial generation with greater tolerance for complexity will make more space for interfaith families. And more space for both peace and more democracy in Israel.

Being Both: Embracing Two Religions in One Interfaith Family by Susan Katz Miller, available now in hardcover and eBook from Beacon Press. Paperback release on October 21, 2014.

5 Replies to “Israel and Interfaith Families: How Big is the Tent?”