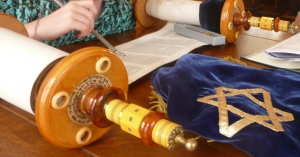 The Jewish festival of Shavuot starts tonight, and the Christian celebration of Pentecost arrives Sunday. Shavuot commemorates the gift of the Torah on Mount Sinai. My rabbi waxes wise and eloquent, as always, on how these two holidays intertwine. But I have to admit that my interfaith family will not take much notice of either one this year: we are still exhausted from our profound Bar Mitzvah experience, and both my teenagers are in the middle of finals in school and must stick to secular studies this evening.

I love the idea of studying Torah all night long, a Shavuot custom, or of attending some hipster downtown alternative (like the ones at Jews United for Justice, or the Historic 6th and I Synagogue). But the truth is that the most I will probably do this year is buy some cheesecake from our fabulous local bakery, run by an interfaith family who promote cheesecake-consumption for Shavuot. The tradition of eating dairy products on Shavuot apparently evolved from the fact that animals were weaned in late spring, creating a sudden abundance of milk.

But coincidentally, or not, the Torah has been much on my mind lately. Over the last few weeks, we had the great privilege to live with a Torah that is loaned to our interfaith community by a member who inherited it from her grandfather. I call it the teeny-tiny-Torah. It isn’t as small, of course, as the little toy plastic-and-paper Torahs my temple gave out on Shavuot or Simchat Torah in my childhood. (I just came across a lovely essay about those toy Torahs, and the idea that both sacred objects and sacred texts have meaning.)

Our Torah is, in fact, exactly the right size for my adolescent son to cradle and prop affectionately on one shoulder like a baby. I love the simple blue velvet mantle our Torah wears. I love the patina on the deco amber and ivory beaded finials (called rimonim since they resemble pomegranates growing on the wooden spindles, known as eytz chayim or trees). I love the simple pine ark our Torah lives in, made by an interfaith teenager who created it, complete with a curtain of golden cloth, as part of his coming-of-age community service project. I am profoundly grateful that we could spend time with this Torah, while my son mastered reading the Hebrew calligraphy lettered onto the parchment.

Anticipating our ceremony, I thought often of the radical Shabbat service I attended during the Dovetail Institute for Interfaith Families National Conference, in Chicago, in 2002. Chicago has pioneered support for interfaith families celebrating both religions: progressive Catholic clergy have long worked with progressive Jewish clergy to help interfaith couples achieve both balance and depth. On that Shabbat, the Makon Shalom synagogue welcomed the conference participants–interfaith families, outreach workers, clergy of all stripes–and we passed the Torah from lap to lap, around the sanctuary, so that every single person could commune with it. For some of the Christian spouses, who may have been barred from handling the Torah in their own family syngagogues, this act was radical and cathartic. Many wiped away tears.

So I was determined to share our tiny Torah with as many people as I could while I had the chance. At our ceremony, we passed it carefully down through all three generations of grandparents, parents, and children in our family, incuding both Christian grandmothers. For they, too, had ancestors who received the ten commandments from Moses. What’s not to share? And we processed through the sanctuary, singing, and showing off our tiny Torah for all to see and touch.