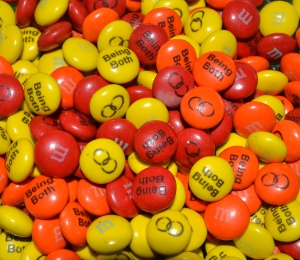 Let me be very clear. Raising interfaith children with interfaith education is not the same as being part of the Christian movement known as Jews for Jesus. Sometimes, I describe interfaith family communities as the opposite of Jews for Jesus, since many of both the Jewish and Christian parents see Jesus as a teacher or rabbi, rather than as a messiah. This is in marked contrast to Jews for Jesus or Messianic Judaism, both forms of Christianity that accept Jesus as the Messiah.

First, some points of agreement with this rabbi: I am aware that Jews for Jesus sometimes target interfaith families. I find this evangelization or missionary work deeply problematic. I am not sure how successful it is, but I think it would have less success if interfaith families felt more welcome in Jewish communities. But that’s a side conversation.

I agree that if you believe Jesus is the Messiah then you are, theologically speaking, a Christian. And I agree that presenting Jewish texts through the particular historical Christian lens of supersessionism (the idea that Christianity “completes” Judaism) is deeply problematic from a Jewish point of view. I also find supersessionism problematic as a universalist who believes each religious system is a product of a specific time and culture with specific value. And finally, I would agree with the author that Christianity is “distinct from and different than Judaism.” That is what we teach our interfaith kids in interfaith education programs. We don’t blend or mix the two religions together.

On the other hand, I strongly object to the author’s implication that Jewish people in interfaith families tend to be ignorant about their own religion and therefore naively ripe for evangelization. My research documents interfaith families “doing both” in which the Jewish partner is in fact deeply knowledgeable about Judaism—went to Jewish Day Schools, ran Hillel chapters, and in some cases would have become rabbis if they hadn’t been excluded from seminaries because of their interfaith relationships. These Jewish parents are not about to become Jews for Jesus. But they do want to teach their children about both their Jewish and Christian heritage.

The author writes, “There are a number of interfaith couples and families that claim that they want to be ‘both.’ They want to honor the traditions of both families and raise their children to be familiar with and respectful of both traditions. Jews For Jesus offers just this solution to potentially painful discussions in interfaith families about the need to choose a family religion and practice.”

Of course, the idea that you “need” to choose one religion for your interfaith family is the author’s opinion. There are more than just “a number” of families celebrating two religions. According to Pew Research, 25% of all intermarried Jewish parents are raising kids “partly Jewish and partly something else.” (I do not like or use the term “partly,” but this is their term, not mine). So trying to minimize or marginalize this choice, the choice to give interfaith children an interfaith education, is no longer practical or reasonable.

I surveyed hundreds of parents who chose interfaith education for their interfaith children. I asked which other religious communities they had considered or tried. Some of these families had belonged to, or still belong to, Jewish, Protestant, Catholic, Unitarian-Universalist, Quaker, and secular humanist communities. None of these families expressed any interest in Jews for Jesus.

Rather than Jews and Christians who agree to teach their children that Jesus was the Messiah, families “doing both” are Jews and Christians who agree to teach their children about all of the various ways of looking at Jesus. They are teaching their children that they are not born into any one theological state. Rather, they are born into two religious cultures, and have the privilege, as human beings living in a country with religious freedom, to choose for themselves what they believe, how they will practice, and how they will affiliate. Some of these children grow up to be Jews who respect Jesus as a great Jewish thinker. Some of them grow up to be Christians with a deep knowledge of and affection for Judaism. None of them, in my research so far, have grown up to be Messianic Jews, or Jews for Jesus.

The author concludes, “I believe it is dishonest and destructive to interfaith couples and families to pretend that ‘being both’ will lead them to live a Jewish life.” I realize, once again, how hard it can be for people born into one religion to understand that for many of the interfaith children I interviewed and surveyed, bothness is not something we choose. Rather, bothness is a deeply felt identity, resulting from the beneficial reality of having extended family from both religions. And for some of us, it does indeed lead to living a Jewish life, for others it does not.

Susan Katz Miller’s book, Being Both: Embracing Two Religions in One Interfaith Family is available now in hardcover, paperback and eBook from Beacon Press.