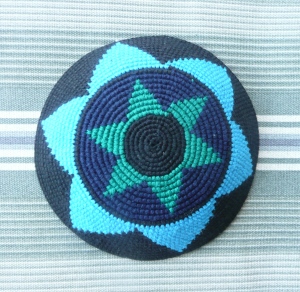 This week, on his “WTF” podcast, comedian Marc Maron conducts a long and thoughtful interview with actor and screenwriter Jason Segel (Freaks and Geeks, How I Met Your Mother, Forgetting Sarah Marshall, The Five Year Engagement, The Muppets). Segel has taken on an ambitious role, playing writer David Foster Wallace in The End of the Tour, a film opening in theaters today. Wallace wrote the iconic, postmodern novel Infinite Jest in 1996, and committed suicide in 2008.

In the first half of the interview, Segel speaks at length about his childhood growing up with a Jewish father and a Christian mother, and his education in both religions. His parents sent him to a Christian school during the day, and to Hebrew school at night. As he describes it, “At Christian school you’re the Jewish kid, and at Hebrew school you’re the Christian kid. I think that’s the nature of groups,” he said. “And so everyone wants to compartmentalize people. And I think I decided at that point, like OK, its just me versus the world kind of.” Segel questions the decision made by his parents: “Neither of them are religious. So they made this decision that they were going to let me decide, which is like the dumbest thing you can do for a kid.

I write a lot about the idea that there are both challenges and benefits to growing up as part of an interfaith family. And, I write about the linked idea that whether your parents choose one religion, or both, or none, or a third religion, or all religions, there are going to be both challenges and benefits to each of those pathways. For many of us who grew up in earlier generations, when interfaith marriage was less common, and less tolerated, the challenges sometimes seemed more obvious than the benefits. But there is a danger in projecting those negative experiences into the present and future, when our children are growing up in a very different, much more fluid and flexible religious landscape.

So, I was frustrated to see that Haaretz, Israel’s oldest daily newspaper, picked up the podcast story and ran a piece today, leading with the idea of Segel growing up “half-Jewish and complete outsider” (their words). Clearly, by leading with this idea, the intent was to use Segel’s story as a cautionary tale, warning parents away from dual-faith education, or from interfaith marriage in general. So, I would like to make a few points in response:

Susan Katz Miller’s book, Being Both: Embracing Two Religions in One Interfaith Family is available now in hardcover, paperback and eBook from Beacon Press.