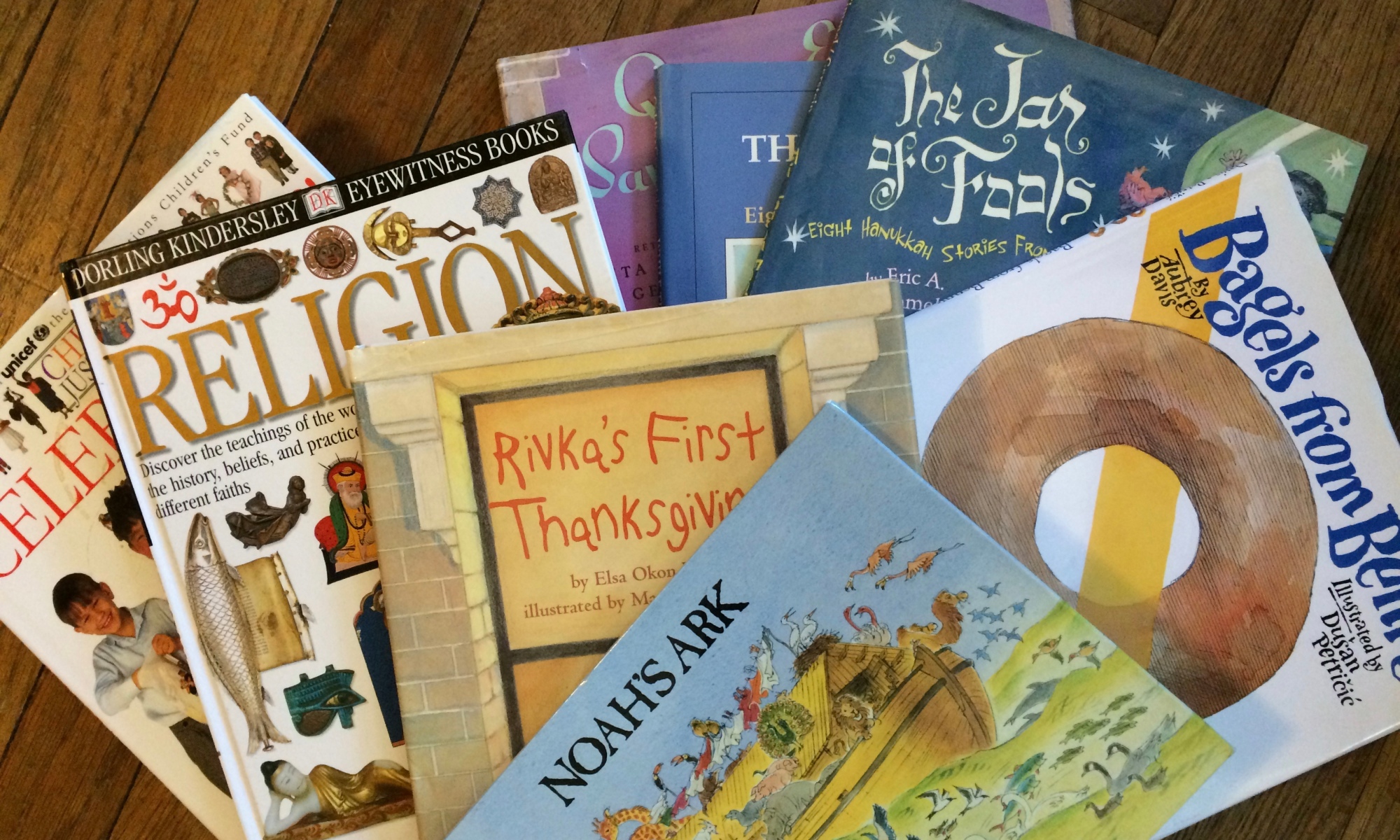 How do we educate interfaith children about the various religions in the family tree? These days, a child may have a Jewish father, Hindu mother, Buddhist uncle, and Christian step-grandparent. Such children benefit deeply from understanding the religions they encounter at home and at family gatherings. And many interfaith parents are on the lookout for supportive tools for interfaith education.

PJ Library, a program providing free Jewish children’s books, turns out to be a great educational resource for any family with Jewish heritage. Created by the Harold Grinspoon Foundation in 2005, PJ Library has now delivered more than 10 million free Jewish children’s books to homes in the US and Canada, with 88 new book titles each year. And a survey of PJ Library subscribers, released in May of this year, found that 42% of the families in the program had a family member who did not grow up Jewish. “I think it’s a very welcoming program,” explains Foundation president Winnie Sandler Grinspoon. “The books we select and the reading guides that are part of the book flap are accessible to any family.”

The PJ Library survey sought to measure, among other things, the Jewish engagement of subscribers. The first marker of engagement was whether a family is raising children as either “Jewish or Jewish and something else.” The second marker was whether parents “believe it is very important that their children identify as all or partially Jewish.”

It is encouraging that a major Jewish funder such as PJ Library understands that families providing interfaith education to interfaith children are engaged with Judaism. The program does not screen out families based on how they should engage with Judaism, or whether or not they are exclusively or “authentically” Jewish. PJ Library’s approach is inclusive, and I hope that other Jewish funders and institutions will begin to appreciate that many of the families providing interfaith education to interfaith children are serious about engaging with Judaism, even if this engagement is not exclusive.

But I was also curious about how many interfaith family subscribers identify as Jewish only, and how many identify as “Jewish and…” So I asked, and PJ Library went back to their survey data and provided me with this rather stunning breakdown: 50 percent of interfaith families in the survey were raising children “Jewish and something else,” while 45 percent were raising children Jewish only.

So, fully half of the interfaith families surveyed were raising kids “doing both.” This is important for a number of reasons. For one, Pew Research in 2013 found 25% raising kids “Jewish and…” So the question is why, just four years later, PJ Library found double that percentage. One reason could be a large increase in interfaith families choosing interfaith education. Another reason could be that families choosing interfaith education are finding their way in large numbers to the very welcoming PJ Library program in order to access Jewish content for their children. And this, in turn, may be related to the fact that some other Jewish institutions (notably, many synagogues) exclude children who are “doing both.” I suspect all of these factors may be contributing to the large number of “Jewish and” families subscribing to PJ Library.

In order to better understanding how and why the program works for families raising kids “Jewish and something else,” I spoke to two locals mothers who subscribe to PJ Library. Lis Maring is Jewish, and her husband was raised Lutheran. They are educating their boys, ages 8 and 13, in both religions as members of the Interfaith Families Project of Greater Washington DC. The Maring family has spent time in India, and their shelves include books on Christmas and Easter, but also on Hindu deities.

Lis Maring signed up for PJ Library several years ago, and says she “highly recommends” the program. Both the Jewish and the Christian grandparents have enjoyed reading the books to the boys. Says Lis, “The books call attention to Jewish holidays I might not be paying attention to, and that helps me. They’re always fun and engaging stories. And they often have a social justice theme to them.”

Lindsay Bartley was raised Episcopalian, and her husband is Jewish. They have two boys, ages three and one, and are also raising them with both religions. They have been PJ Library subscribers for nine months now. “What I like is that when you go to stores, it’s easy to find Christian holiday books. It’s mainstream. But Jewish books are harder to find,” says Lindsay. “If we didn’t get the PJ Library books, we would definitely have more Christian books.”

A handful of PJ Library books have featured interfaith families. But both Lis and Lindsay note that they are seeking Jewish content from the program, not affirmation of their family choices. They are not concerned with seeing more interfaith families represented in the books, as long as the spirit of the program is inclusive. “I have generally been impressed that the books are not judging or telling you that there’s only one way,” says Lindsay.

PJ Library’s Sandler Grinspoon makes clear that they are happy to send books to “being both” families. “This entire program is for interfaith families, and non-interfaith families, whether it’s the exclusive religion in the home or not” she says. “If your family is looking for tools, and you’re going to present Judaism to your children, whether it’s the only thing you teach them or part of what you teach them, then this is a very easy tool.”

Meanwhile, interfaith parents teaching religions beyond Judaism and Christianity will need to consult librarians or booksellers, and check out #WeNeedDiverseBooks on twitter or Pinterest. Bharat Babies, a children’s book subscription service on Indian culture including both Hindu and Muslim topics, was inspired in part by PJ Library. And Noor Kids creates books on Islam for subscribers. Such programs may well thrive and proliferate as millennial parents, many of them unaffiliated with traditional religious institutions, continue to seek out tools for interfaith education.

Journalist Susan Katz Miller is a speaker and consultant on interfaith education for interfaith families. Her book Being Both: Embracing Two Religions in One Interfaith Family is available from Beacon Press.