In yesterday’s Washington Post, Michelle Boorstein reports on Washington DC synagogues “trying to make room for interfaith couples.” Note the use of the word “trying” here. The article does chronicle significant progress in the Jewish community in welcoming interfaith families, and that is cause for celebration. But it also recounts poignant stories of families trying to connect to Judaism and facing restrictions, limitations, and exclusions. Such restrictions help to explain why a growing number of interfaith families (including 25% of intermarried Jews nationally, according to Pew Research) now choose to raise children with both family religions, rather than choosing one religion.

Below, I list ten of the many reasons couples join interfaith family communities, instead of, or in addition to, synagogues. These reasons are drawn directly from the Post‘s article.  Of course, there are also many positive reasons families choose an interfaith community, including support from both a rabbi and a minister (or priest), literacy for children in both religious languages, and being part of a community in which neither spouse feels like a guest. For a deeper understanding of why interfaith families choose interfaith communities, I recommend reading Being Both.

Recently, support for interfaith families of all kinds took a giant step forward when the London-based Christian Muslim Forum released an excellent new publication: “When Two Faiths Meet: Marriage, Family and Pastoral Care.” These guidelines for clergy were released at an event at the venerable Westminster Abbey no less, and attended by supportive ministers and imams.

The new document includes case studies of Muslim and Christian couples and families, and ten “Ethical Principles for Ministers, Imams, and other faith leaders” on how to best provide pastoral care to interfaith couples. The report points out that neither ministers nor imams “are being trained to respond to the increasing numbers” of interfaith couples.

The guidelines include the importance of ensuring that “individuals are not forced or pressurized to convert in order to marry.” Conversions made under pressure “may cause resentment in the long term” a “risk which may also apply in the case of enforced decisions about the faith identification of future children,” the guidelines state. This is brave language, and applies equally, in my experience, to Jewish and Christian, or Hindu and Muslim, or any other interfaith couples.

The report notes that the children of interfaith families “often report that their connection to two heritages is important to their sense of identity” and that they “are not confused by knowing both faiths or learning differences.”

Seeing my own positive reality as an interfaith child and an interfaith parent reflected in a report produced with the help of clergy from more than one religion, I feel a tremendous sense of affirmation, of being understood. I can only hope that here in the US we will take inspiration from this collaboration, and these new guidelines. In the meantime, we all benefit from the ability to get a free download of the guidelines from the other side of the Atlantic Ocean.

Plenty of movies depict interfaith couples: Exodus, Annie Hall, When Harry Met Sally. The new romantic comedy The Five Year Engagement chronicles the courtship of chef Tom (Jewish), and graduate student Violet (Christian). Actor Jason Segel, the leading man and script co-writer, happens to hail from an interfaith family himself. So I went to see the movie, searching for traces of Segel’s view on interfaith life.

Last year, Segel co-wrote and starred in The Muppets. The first time I heard “Man or Muppet,” the Grammy-nominated song from that movie, the song immediately struck me as a metaphor for the choices the world forces on interfaith children. I would love to find out whether Segel ever thought of the song in those terms.

Generally, I have to say I am not a fan of  the work of Judd Apatow, producer of The Five Year Engagement. Though I appreciate the sharp and witty dialogue, I prefer my romance without Apatow’s signature drunken vomiting, potty humor and crude guy talk, all of which appear in this film. The Five Year Engagement also runs too long, with a rambling chronology. On the other hand, the film centers on a real and bittersweet exploration of the dilemma for both partners over work, geography, and marriage.

Religious difference plays very little role in this film’s plot. Segel has said that some of the religion material ended up on the cutting-room floor. I like to imagine that by minimizing religion as a source of conflict, Segel, as an adult interfaith child, is making a positive statement about the possibilities of interfaith love.

We do get a glimpse of religious difference in each of the successive wedding plans, as the couple repeatedly approach and then back off from tying the knot. In the first wedding planning session with all four parents and a clergy member representing each side, the Jews announce that the men will wear yarmulkes, and the Christians counter with a plan to have communion at the wedding. Interfaith lesson #1: passive-aggression, willful religious ignorance and hardline negotiation are not effective interfaith communication skills. The wedding plan falls through.

In their next attempt, the couple approach a Chabad rabbi at the last minute, who asks if the bride is Jewish. The couple dissembles and the rabbi dances at the engagement party (in a barbecue joint specializing in pork!). But the wedding again falls through. Interfaith lesson #2: dishonesty about who we are and last-minute random religious choices are not helpful. The wedding plan falls through.

In the end (spoiler alert, though you will see it coming from a mile away), the couple succeed in getting married. Choosing between a Christian, an “extreme Christian” (who appears to be Eastern Orthodox), a Buddhist, a Rabbi, and a justice of the peace, Tom chooses the lay officiant. Cue the happily-ever-after credits. Interfaith lesson #3: the desire for a sense of balance often leads interfaith couples to choose a secular officiant. If both members of the couple are secular people, this works fine.

For those of us who want balance, but also care deeply about religion, finding clergy to co-officiate is the alternative to a justice of the peace. But this solution would have been too complex for the rushed wedding in this movie, and perhaps too much religion for the fictional couple in question.

In a recent interview with the Jewish Journal, Segel described his upbringing this way: “My dad’s Jewish, and my mom’s Christian, so I was raised with a little bit of everything.” Note that he introduces his own religious background with a description of balance, rather than choice. His lament is familiar to all of us who felt excluded growing up as patrilinial Jews: “I wasn’t considered Jewish at Hebrew school because my mother isn’t Jewish, and I wasn’t considered Christian at Christian school. What occurred to me is, ‘This is not God’.”

Segel had a Bar Mitzvah. But when asked if he considers himself a “cultural Jew” he replies: “Yes. But in terms of organized religion, again, I think the notion of ‘I know better than someone else’ is wildly arrogant.” Here, Segel sounds to me like a classic adult interfaith child. Having lived the experience of growing up in interfaith families, we tend to see the world from more than one viewpoint, and we tend to question the idea that only one religious tradition could be the true path. We are also likely to feel alienated from religious institutions that have rejected us.

Rather than bitterness, Segel’s fairytale ending expresses optimism that interfaith couples can achieve happiness. For those of us who grew up in functional interfaith families, interfaith love is not just a romantic fiction. We need to stand up and be counted, to let the world know that in spite of the obstacles our parents still love each other, that we are not confused, and that we draw creative power from our double-belonging. 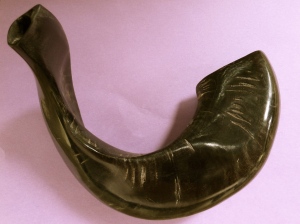 When we experience the religious rituals of the “other,” we usually cannot help but respond with an internal running commentary, seeking connections to our own past. I know that whenever I heard the blast of a conch shell at an Afro-Brazilian rite during my years in Brazil, my mind would skip back to the sound of the shofar in my childhood temple.

On Rosh Hashanah and Yom Kippur, many Christians (and Muslims, Hindus, Buddhists, atheists) find themselves attending services with Jewish partners, or parents, or other family members. These services, while tremendously important to Jews, can be difficult for those without Jewish education to access, due to length, solemnity, and the density of Hebrew.  Nevertheless, I always strongly recommend that those of other religions accompany their Jewish partners or parents to synagogue services, both to keep them from feeling lonely, and to learn and reflect.

In our Interfaith Families Project, a community of interfaith families raising children with both Judaism and Christianity in Washington DC, we have the great fortune to have annual High Holy Day services led by Rabbi Harold White, a rabbi who spent 40 years in a Jesuit environment at Georgetown University. Recently, he shared some interfaith interconnections to look for on Rosh Hashanah and Yom Kippur:

Finding a welcoming service, getting off work, arranging childcare, sitting through services, fasting, gleaning meaning from ancient prayers in an unfamiliar language. None of this is easy, but it is still essential experiential education for any family connected to Judaism. For Jews, having the support of a partner in these days of deep reflection and soul-searching, of repentance and renewal, provides comfort and promotes bonding. For interfaith children, having both parents sitting with them at services provides a clear message of respect and appreciation and love by the parents for each other, and for the children, and for ancient ritual.

Journalist Susan Katz Miller is an interfaith families speaker, consultant, and coach, and author of Being Both: Embracing Two Religions in One Interfaith Family (2015), and The Interfaith Family Journal (2019). Follow her on twitter @susankatzmiller.