I’m very pleased to announce that Being Both is the December selection for the #UUreads program. I wrote this piece for Beacon Broadside, the marvelous blog from my publisher, Beacon Press. To read it on that blog, click here. 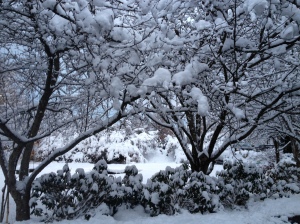 After our family Thanksgiving, set in the muffling silence of eternal snow in northeastern Pennsylvania, I sent my daughter back to her sunny California college with a care package to remind her of all the Christmases, and all the Hanukkahs, of her childhood. I tucked into her bag an Advent calendar, and tiny Hanukkah presents wrapped in tissue paper, numbered for each of the nights until she comes home for winter break.

As interfaith parents in 21st century America, we have the freedom to choose the labels we bestow on our children. A Jewish and Christian couple may raise children as Jewish, or Christian, or Unitarian-Universalist, or Quaker, or Buddhist, or secular humanist, or interfaith, or on two or more of these pathways simultaneously. No single choice is going to work for every interfaith family.

For me, Hanukkah resonates deeply because I have Jewish family. And at the same time, Christmas resonates deeply because I have Christian family. In raising my children with both family religions, my intent was to give them permission to explore, and feel, and understand both religions, and this time of year, that means participating in both holidays. After experiencing both the “choose one” pathway as a child, and the “choose both” pathway as a parent, my contention is that there is no way to exclusively raise a child with one religion in an extended interfaith family. I agree that for some interfaith families, it makes sense to choose a singular religious label and formal religious education in just one religion. But family is family, and in the end, a claim that we are raising children exclusively in one religion means trying to exclude the emotional weight and sensory memories of the family traditions we experience together.

In the coming weeks, in her dorm room thousands of miles away, each day my daughter will open the cardboard windows adorned with faeries and mushrooms on her Advent calendar. And each night she will snap the glow sticks and insert them into her fire-safe, dorm-approved, plexiglass menorah for Hanukkah, emitting a multicolored luminescence. Then, she will sleep in the close and holy darkness, and dream of returning to her extended interfaith family for the final days of both holidays.

Being Both: Embracing Two Religions in One Interfaith Family by Susan Katz Miller, is available now in hardcover, paperback and eBook from Beacon Press.

A couple of years back, the venerable Jewish Daily Forward published a blogpost in the form of a letter attacking my family for celebrating Christmas. I waited several days before responding. Meanwhile, readers and bloggers rushed in to decry the “snide” “condescending” “offensive” “anti-interfaith family” tone of the original post. One wrote that it “paints a scary picture for interfaith families in the Jewish community.”

But in the six months since the publication of Being Both, I have witnessed a different picture emerging. I have been honored to give talks sponsored by synagogues, Hillels, Jewish Community Centers, and a group of rabbis. I was invited onto an interfaith family task force by my local Jewish Federation. And The Forward chose my beloved rabbi, Harold M. White, the Jewish Spiritual leader of my interfaith families community, when I nominated him as one of the most inspiring rabbis in America for 2014.

Granted, progress comes in fits and starts. Sometimes a leader from a synagogue discussion group calls asking me to speak: these congregants are worried about intermarried children and grandchildren who are often “doing nothing.” They wonder if “doing both” might not be a richer experience for their grandchildren, and a better bet for Jewish continuity. Whenever I receive one of these invitations, I have to ask if they have checked with the rabbi. More than once, I have received a call back from a frustrated and embarrassed congregant dis-inviting me, and explaining that the rabbi sees my mission as counter to the mission of institutional Judaism.

And yet, everywhere I do speak, I see the religious landscape shifting, with extended families and religious institutions far more willing now to support interfaith couples and children, even when they must “share” them with another religion. And that means that interfaith families have many more good options for finding community than they did a generation ago, whether that community is Jewish, Christian, Unitarian-Universalist, secular humanist, or (like my own Interfaith Families Project) intentionally interfaith.

Just this spring, I realized once again how far we have all come when The Forward, the same media outlet that published that scathing letter addressed to me two years ago, asked me to join the roster of experts for their new interfaith relationship advice column, The Seesaw. The expert panel includes an Orthodox Jew living in Israel, a Christian spouse, and Rabbi James Ponet (Chelsea Clinton’s rabbi). I am the only panel member raising children with any formal religious education beyond Judaism.

If I were to design my own roster of experts to give advice to interfaith families, I would of course choose people raising children on many different religious and non-religious pathways. But given the chance to represent something other than the “you must raise kids exclusively Jewish” perspective,  I said yes. The comment section on The Seesaw is at times filled with sarcasm and intolerance, and at least one of my fellow respondents regularly despairs over my responses. But over all, I enjoy seeing how the respondents reflect diverse Jewish viewpoints, often displaying a deep sensitivity to the nuances and complexity of interfaith family life.

I advocate for the Jewish community (and all religious communities) to engage with, rather than exclude, parents who expose their children to more than one family religion. Given that Pew Research has found that 25% of intermarried Jews are raising children with more than one religion, the logic of including rather than spurning these families seems very compelling to me, even when viewed through the lens of preserving Jewish institutions. And this spring, I see a flowering of support for the idea of providing Jewish content to all families who want it, creating meaningful Jewish experiences for them, and allowing children to grow Jewish roots, even if they are putting down roots in more than one family tradition.

I celebrated my birthday this week, in my childhood home, with my pioneering interfaith parents (who are 83 and almost 90). It seemed like a fitting moment to look back on an exhilarating six months of public interfaith conversations. If you are in the Washington DC area, I hope you will join me for my final interfaith talk of the season, at the MLK branch of the DC public library this Wednesday at 7:30pm.

And if you haven’t been able to get to a live Being Both talk, you can watch two new videos. One is a webinar posted by Religions for Peace USA, in which I chat with Aaron Stauffer of Religions for Peace USA, and adult interfaith child Samantha Gonzalez-Block. The other is a video of an event at the Berkley Center for Religion, Peace & World Affairs at Georgetown University, in which I appeared with Georgetown’s Erika Seamon, author of the excellent academic book, Interfaith Marriage in America. Erika’s history of interfaith marriage at the beginning of the program is fascinating, and don’t miss our lively Q&A with students and faculty at the end.

I already have plans for talks in Chicago and New York next fall. Let me know if your community wants to be included in either of those visits, or if you want to host a talk elsewhere in the country. I look forward to a conversation that will continue with all of you, growing deeper and wider and more complex, next year, and into the years ahead.