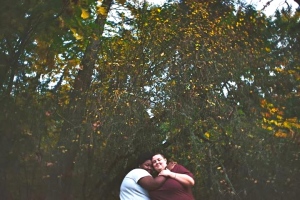 Today, we feature a guest post by writer Camille Mellin, on her perspective as a Pagan married to an atheist. You can follow Camille on twitter @Camille_Mellin. For more on religious and atheist interfaith relationships, I highly recommend the recent book In Faith and In Doubt: How Religious Believers and Nonbelievers Can Create Strong Marriages and Loving Families, by Dale McGowan.

I am a Pagan married to an atheist living in New England. We are a young couple and were both stunned at how much an interfaith relationship can affect the relationship, and especially planning for parenthood. My husband was inexperienced when it came to Paganism, and so from the start, I needed to clear up several common misconceptions, including what takes place during rituals, rites, and ceremonies. The frequency of these activities were perhaps a bit of a shock to him as well. As a Pagan, there are eight sabbats throughout the year that require a great deal of my attention, as well as daily, weekly, and even monthly blocks of time devoted to worship and reflection. As I am not a part of a coven, and worship independently, I found that I needed my own space dedicated for my religious practice, in our home. It took some time, but eventually we came up with a schedule that met both of our needs.

Luckily, my husband is an open-minded person, but of course there have been some tense moments that blossomed from my religion and his lack of one. Perhaps the biggest argument took place while discussing future children. Neither of us are interested in forcing our children to believe in (or not believe in) anything. However, I would be open to involving my children in some kid-friendly activities, crafts, recipes, and more every now and then. In contrast, he expressed his concerns with ‘cornering’ our children into one religion instead of letting them choose for themselves whether they wanted to go the religious route or not.

I understand his concern. Growing up, I was never taught any other religion but Christianity, and was in fact told that all other religions were false and were not worth learning. Conversely, my husband was brought up in an open atmosphere as pertains to religion. He learned about all the major religions and in the end decided he did not believe in any of them, however, at least he knew of them. Likewise, I would like to teach my children about as many religions as possible. I do not want my children to feel they are cornered into believing anything. They will of course see their mother practicing Paganism, and their father practicing atheism, and will therefore have more knowledge about these paths.

My husband and I are an interfaith, interracial couple, and my husband is transgender. Each one of these comes with a fair amount of culture shock. I believe religion to be extremely private, and so I don’t usually discuss it with people whom I know find it uncomfortable, including many family members. When it came to the wedding, my husband was adamant that we incorporate a Pagan handfasting ceremony, because he knew how important it was to me. And while I was grateful that my husband respected my religious beliefs so much that he wanted to merge my beliefs with a standard ceremony, I found it difficult to imagine participating in something so intimate in front of my family. In the end, we decided to have the handfasting separately, by ourselves.

Susan Katz Miller is the author of Being Both: Embracing Two Religions in One Interfaith Family, from Beacon Press. She works as an interfaith families consultant, speaker, and coach. Follow her on twitter @susankatzmiller.

One Reply to “Interfaith Millennials: A Pagan and Atheist Couple”